Inside a Flashy Trump Project in Uruguay: Cash Shortages and Mismanagement

By Jesse Drucker and Manuela Andreoni

He was en route to one of the Trump family company’s most ambitious ongoing development projects — a 25-story, 156-condominium waterfront tower, complete with an indoor tennis court, multiple swimming pools and a rooftop helipad. “It’s incredible,” Eric Trump said to reporters on the trip. “We have the best building anywhere in Punta del Este, anywhere in South America.”

Instead, the cylindrical high-rise is turning into the latest debacle in the Trump Organization’s far-flung property portfolio — featuring a little-known Argentine real estate firm in a gaudy, hard-partying town that has been a destination for money launderers and tax evaders.

If all goes perfectly, Trump Tower Punta del Este will be completed at the end of 2020, about four years behind schedule. But people involved in the project said they are not sure if or when it will be finished.

Construction is barely proceeding, in part because less than one-quarter of the necessary workers are currently on the job. The Miami-based broker handling the sales of condos has sued Trump’s local developer. Some purchasers are now seeking to sell their units, potentially driving down the prices just as the project needs to drum up cash via the sale of new units. The tower is currently uninhabited.

“Of course not,” Richard Sampallo, a director of the union that represents the construction crew, said when asked if it will be finished by the end-of-2020 target. At the current pace, he estimates it may take another four years, at which point it will have been roughly a decade since it got underway.

As with its other international developments, the Trump Organization isn’t actually building the Punta del Este tower. Instead, it licensed the “Trump” name and takes a cut of the revenue from selling units.

The problems in Uruguay are a microcosm of the challenges facing the president’s company as it stakes its future on projects outside the United States. In February, the Trump Organization announced that it would discontinue any new hotel projects in the United States. As a result, the company is more reliant than ever on long-running international projects, such as the ones in Uruguay, Indonesia and the United Arab Emirates.

Punta del Este — Spanish for Point of the East — is arguably Latin America’s capital of conspicuous consumption. During the peak summer season, about 400,000 people descend on the town, whose year-round population hovers near 20,000. They come mostly from Buenos Aires, 30 minutes away by private jet. The beachfront waters are crowded with yachts. Celebrities like Mark Zuckerberg and Naomi Campbell have vacationed there.

A small forest of white high-rises has sprouted in recent years, and the once-sleepy city resembles a miniature version of Miami circa 1970. More towers are rising, including high-end projects by the luxury brands Fendi Chateau and Cipriani. Some apartments sell for more than $5 million.

Punta del Este also has another claim to fame: For decades, wealthy Argentines and others have moved money out of their country and into real estate in Punta del Este to hide it from the tax authorities. Last year, Uruguay overhauled its anti-money laundering laws, prompted by high-profile incidents including a Mexican drug gang washing money through Punta del Este homes.

The Trump Organization hasn’t been accused of wrongdoing in the Punta del Este project.

In 2007, the company was dipping its toes into Latin America, including trying to build a golf course and villa development in the Dominican Republic. Local real estate officials said a developer involved in that project — which was derailed by financial problems — introduced the Trumps to two Argentine real estate developers, Moisés Yellati and Felipe Yaryura, to discuss a development in Punta del Este.

By late 2011, Mr. Yellati and Mr. Yaryura had assembled a group of investors and bought the land in Punta del Este, according to people familiar with the deal. They paid about $18 million.

Another figure central to the project’s early stages was Mr. Yellati’s brother-in-law, Mr. Dujovne, Argentina’s future economics minister. Mr. Dujovne, whose father’s architecture firm was designing the tower, was a prominent economist and television talk show personality. Mr. Dujovne was involved in the purchase of the land and later tried to sell condos to his contacts in Buenos Aires, according to people familiar with his role.

The Trump Organization unveiled the deal in 2012, saying the tower would be finished by 2016. Eric and Ivanka Trump traveled to Punta del Este in early 2013 for a ceremonial groundbreaking. Two years later, Eric was back, this time with his wife, Lara, to celebrate the beginning of construction with a party featuring Uruguay’s national red wine, Tannat. 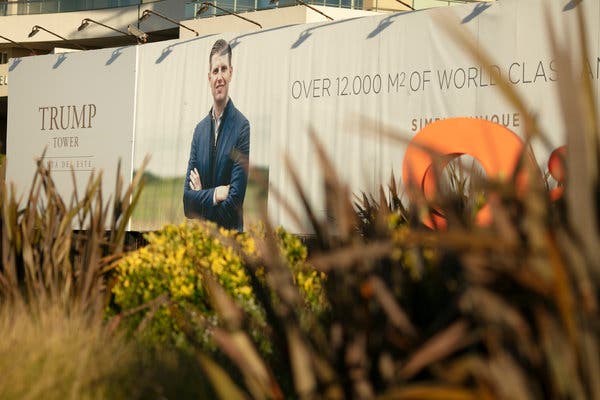 The building’s construction was to be paid for with money raised by selling condos. That meant it was crucial for the developers to quickly find buyers. YY Development Group relied on the Trump brand to market the project, plastering its website with references to the Trump Organization.

Then the problems started.

YY had used the project’s land as collateral to take out at least two loans, including one for about $5 million. But it had not disclosed the second loan to some of the early condo buyers, according to court papers. When the soon-to-be-owners learned that the developers’ finances were more precarious than they had realized, some canceled their contracts, according to two people familiar with the matter.

Next, a dispute erupted with the broker that had been hired to sell units. The broker, Fortune Realty of Miami, sued YY for $3.3 million in allegedly unpaid commissions and damages.

The lawsuit is pending in Uruguay. One possibility is that Fortune Realty will seek “un embargo” of the property, which could prevent YY from selling some units until the litigation is resolved.

At least three of the apartments were bought by companies or individuals tied to a pair of Uruguayan accountants who collaborated frequently to set up shell companies with the Panama law firm Mossack Fonseca. The firm’s leaked files, known as the Panama Papers, were obtained by the German newspaper Süddeutsche Zeitung and the International Consortium of Investigative Journalists and offer an inside look at the world of offshore money laundering and tax evasion.

Meanwhile, the involvement of Mr. Dujovne in the project’s early stages has taken on new significance with Mr. Trump in the White House. In 2016, after Mr. Trump was elected, Argentina’s president appointed Mr. Dujovne as economics minister.

At a news conference days later, Mr. Dujovne was asked about his relationship to the Trump family. He mentioned his father and brother-in-law’s work on the Punta del Este project, but he did not detail his own role.

“My relationship took place many years ago, when the current president of the United States hadn’t yet began a political career,” he said. “And it’s been many years since I have had any contact.”

A spokesman for Mr. Dujovne said in a statement: “Minister Dujovne has investments in the private sector, some of which are in Uruguay. All these investments were made before he entered public service and have been declared” to Argentina’s tax and anti-corruption authorities.

Mr. Dujovne was the country’s lead negotiator with the International Monetary Fund. Last year, he traveled to Washington and procured a $57 billion loan from the I.M.F., the biggest in the fund’s history. There is no indication that he received the bailout because of favoritism.